The crew in monolith valley

Mike half in the tent after a night camped on a slope.

Mike half in the the tent…

Mike and the mountains 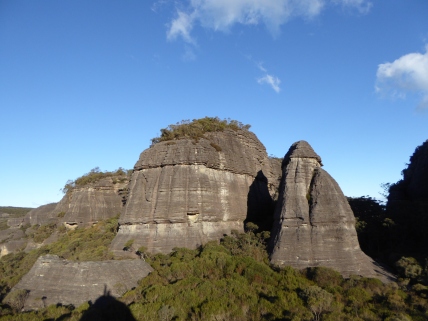 Monolith Valley and the pinacles

The crew heading up a pinacle….

Last weekend was the long weekend in NSW and the ACT so a group mates from high school and I decided we would head out on adventure. Despite my many years of sporadic hiking and adventures I had never made it out there before so this was set to be a great weekend.

The week prior to out adventures an east coast low had absolutely smashed the area, which was evident from flood debris lodged six metres up in trees here and there.

Anyway a rushed packing session on Friday afternoon saw me arriving at Long Gully Campground at around 11pm and I crashed in a heap to be woken at 1am by the arrival of Mike, Dom and Tim who took great care to wake me up. Thanks guys….

The hike was based on a walk described in Tyrone Thomas’ book 70n Walks in Southern NSW and A.C.T. which does an excellent job of setting out the route and points to watch out for in navigating so I won’t bother going into details. The one point I would make is that for people like me who like to sleep in, take breaks and enjoy the scenery the described two days in a full day to short.

So key points of the hike: