We have been pottering around in the car for the past few weeks, visiting people and exploring Scotland. We have particularly focused on bits of the west coast where neither of us had been before.

In this leg of the journey we visited Oban, Mull, Staffa, Glen Coe, Ardnamurchan, and Fort William. Each place has been pretty awesome, we have apparently had unseasonably wet weather so we have been mixing up camping and BnBs.

The Isle of Staffa is only accessible by boat, and as something we’d heard about a few times and knew we wanted to do. We booked out your the day before (yes typical me as always) and found a room in Oban for the night either side.

The tour was pretty cleverly organised using the Calmac Ferry and local bus service to get to our little boat, and then we were off in the wind, rain and increasingly big swells to see the island.

As we got close the guides told us that because of the size of the swell and the tide we would only have 40 minutes on th island. Of we took any longer we’d be marooned for the night! They managed to get the boat to the pier in between waves and we rushed off to see the cave. While there were heaps of people it was still brilliant, and most people didn’t stay quite as long as we did so it wasn’t toooo crazy by the end.

The boat made it back to the pier and we got aboard, but one person was running late and missed the boat. Luckily another tour group picked him up and we got to swap boats. 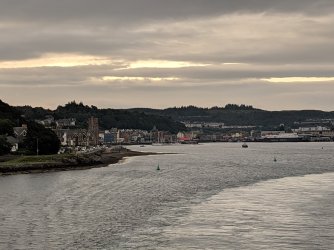 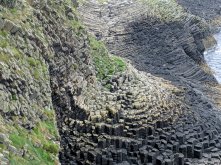 We stayed on Glen Coe for the night after Oban just to check out the sights. Surrounded by 8 Munros it is an impressive vista, but we don’t really see th appeal of climbing the massive hills so we chose some sedate valley bottom walk.

From Fort William we ended up in Steall Falls at the recommendation of a waitress we met. She said it was an amazing falls that no one knew about so was quiet. Turns out everyone knew about it and it was rather busy! Still amazing though! 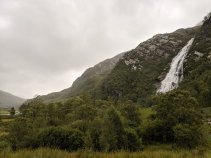 We went here on whim because there was a light house and a distillery and a campsite near the coast. Turned out to be lovely but geez it rained sooo much. We had a river running under the tent! 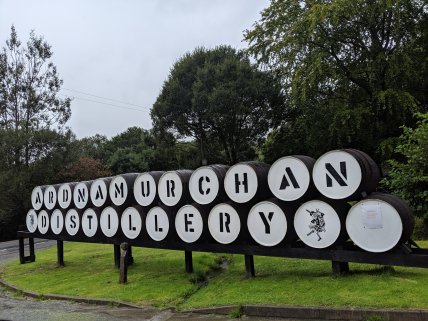