Last week my partner and I had the pleasure of visiting the lovely verdant Tasmania. Now all of you fellow Aussie out there are probably thinking why on oath would go to Tassie in the middle of bloody winter*. I could tell you that it is because of our love all things winter, or that we wanted to experience what cold actually is, or even that we really wanted to see the Cadbury factory, but in truth we went because we were luck enough to win flights from the Tassie Government “Cheeky Seats Giveaway“. This awesome campaign, with an equally awesome logo, gave us return flights to the Hobart on the proviso that we spent our tourist dollars in the relatively cash poor economy**.

Well what could we do by comply. I won’t bore you with the details of the trip except to say that you should ALL go to MONA and watch the video of two men puttering around a Loch in Scotland in a wood fired steam boat, using the boat itself as fuel!

Actually I will give you some details because otherwise the photos below won’t make much sense.

After spending our first day in Tassie relaxing, the second day was spent at MONA looking at some really amazing art, much of which I don’t even pretend to understand. I was impressed by the amount of interested (ready nerdy engineering) art that was there including the afore-mentioned boat, a great video of a remote control helicopter in a box, and an amazing whole of room projection showing lots of data about the galaxy as exported from somewhere that is home to smart people.  I don’t know if I can explain it in any useful way, it is quite amazing to walk around a room that strongly resembles the matrix.

Following my enlightenment at MONA we went out to Port Arthur to get some history and nature into our trip as well. Port Arthur itself is home to some amazing elements of Australian history, from early whaling and convict settlements right through the modern times with bush fires and the massacre. What really made the visit though was doing the ghost tour after dark. The passion and story-telling of the guide made it a night to remember, I don’t think I have ever jumped as much when a door slammed on queue! 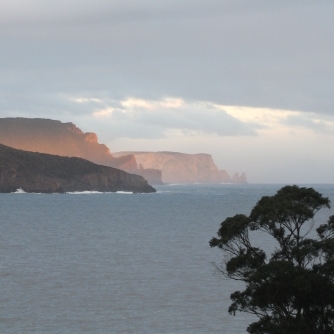 Sunset on the Tassie Coast 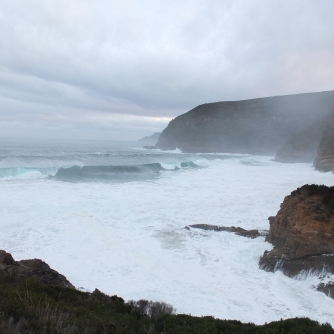 Safety Bay right near the Remarkable Cave. Does it make you feel safe? 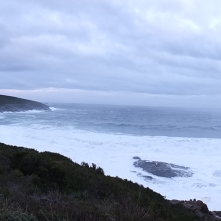 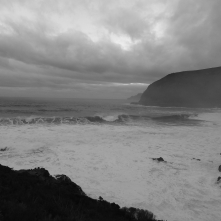 Waves breaking off shore. The swell must have been at least 10m. 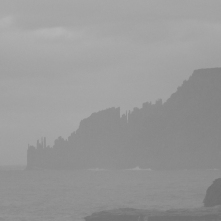 Sea cliffs in the Southern Ocean. 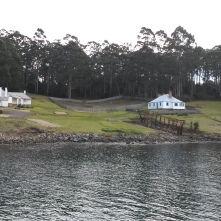 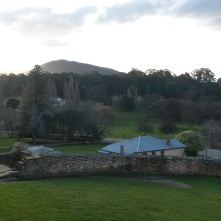 Looking down on Port Arthur, it is hard to believe this was a convict station. 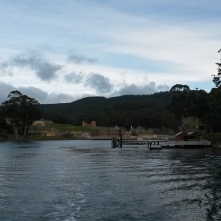 Port Arthur from the bay.

From here it was off to Cape Huay and the tallest sea cliffs in the world. Growing up in Sydney, and having spent a fair bit of time on the various head lands and cliffs that bless the east coast generally I thought I was pretty well on top of how tall cliffs along the ocean could be. These sea cliffs are something else entirely!

Formed from dolomite the cliffs are sheer, angular and incredibly tall making for dramatic scenery unlike anything I’d ever seen before. To see the best of the best, and in the hope of seeing the famous Totem Pole we made our way to Fortescue Bay in the Tasman National Park and went for a stroll for a few hours our to Cape Huay. The well-formed track  took about 2.5 hours of walking to reach the cape and passed through some beautiful eucalypt forest as well as Tasmanian coastal heath zones.

Once we were the we were greeted with spectacular views, massive cliffs, tea and rainbows. 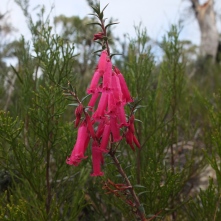 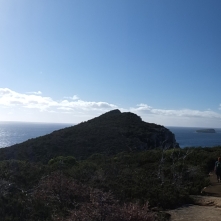 No more to say! 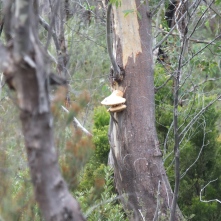 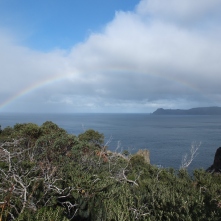 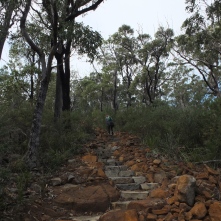 Steps, there was quite a lot of up and down on this walk! 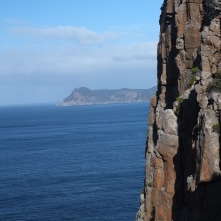 I really did mean tall! They aren’t the tallest sea cliffs in the world without reason. 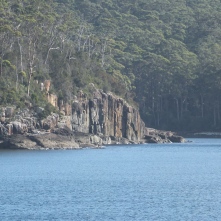 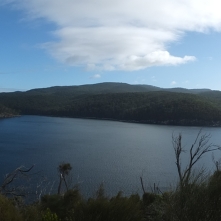 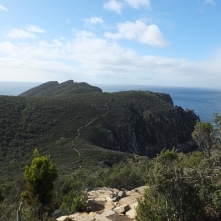 I don’t know why but I have always loved the sight of a track running off into the distance. This has to be up there with the best! 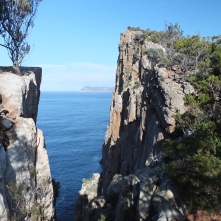 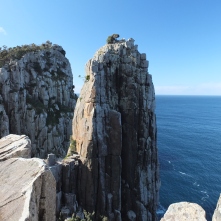 Have I mentioned the cliffs are tall! 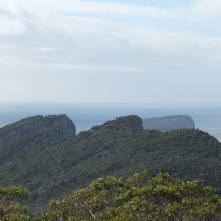 These hills only have one side!

Hope you enjoyed the photos, and not being given details of the trip!

* The British among your are probably thinking 8 degrees, is positively balmy still!

** The Tassie economy possibly being weak because they export delicious products like cheese, salmon, apples and seaweed instead of coal.

Working on my watercolouring! #stayhome #Jagungal #adventure #watercolour
Photos of granite boulders and wildflowers from up on top of the Rolling Grounds. I don't think it would have been possible to pick a more spectacular day if I had planned the trip. Instead I went almost spontaneously and just got really really lucky. All of these photos are unedited snaps from moments when I just happened to look in the right direction! #kosciuszkonationalpark #kosciuszko #bushwalking #hiking #adventure #offtrack #rollinggrounds #thatsaniceboulder #notfilter #wildflowers
Made it out to Valentine's hut for the night over the weekend. This spectacular hut in the #Jagungal wilderness is brilliant, and I can't believe how well @mont matched the colour of their tent to the hut. Was it intentional? Also had a spectacular sunset, and despite being out on a solo walk a fun crew of people to hang out at the hut with! #hiking #bushwalking #wilderness #australia @kosciuszkohuts #adventure #selfisolation #outandabout