Now for anyone who hasn’t caught on with previous posts I recently bought a Surly ECR, which is a “semi-fat bike” with three inch tyres adequate for riding on most soft loose surfaces like sketchy roads, sand and purportedly snow. Living in Alice Springs there wasn’t a chance I would be taking the bike to snow. Living in Sydney though it is possible for snow to occur only a matter of hours away so this weekend I went looking for it!

I meet up with Simon from the FB group Fat Bikes Down-Under at Corin Dam in the ACT to start what I had presumed would be a leisurely ride and frolic in the snow. What transpired was entirely different.

Meeting Simon at Corin Dam we compared bikes and wheels. His 5inch tyres were wider but much smaller overall then my 29+

From the Dam wall the ride quickly became a walk, and the walk quickly became a trudge, as we began the long accent from near the bottom of the valley (as a dam wall logically suggests in hindsight) up to Stockyard Spur where we hoped there would be snow we could ride out bikes in. I’d loaded up my bike with a frame bag and bar roll full of food, water and a multitude of warm clothing which meant the bike probably weighed in at about 30 kilograms, or in a more accessible unit of measure – too much! 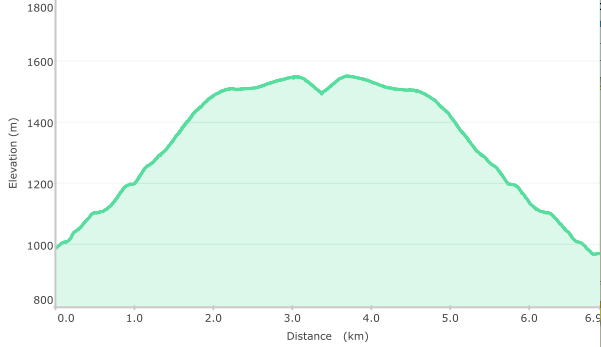 The two kilometres to reach the top of the spur took over two hours of solid pushing to climb the 5oom, and with snow and ice starting about 100m from the top the last part of the distance was slow and treacherous. The rewards at the top were worth it though. I was greeted to a scene of beautiful snow gums, shin deep snow (15-20cm mostly), and weather that alternated between bright sunshine and snow flurries which were just enough to fill the tread marks in our tyre tracks as we rode.

As far as riding goes I am not sure I would describe it as successful. On my 29er plus semi-fat bike I spent the vast majority of the time pushing up hill and on flats. There were a few sections of downward slope which were rideable, but only where walkers had compressed the snow enough for there to be a firm pack to place the tyres on. As you can imagine in a fairly remote and hard to get to place there hadn’t been much compaction, and I would honestly guess that in the four and a half hours my little adventure took from car to car I rode for no more than 15 minutes.

I do think in a compacted snow field, probably something that had been groomed by snow-cats or something, it would be both possible and enjoyable to ride my bike in the snow. However for un-groomed fluffy snow I think it is safe to say I won’t be planning any more adventures of this type too soon. Not never, because it was fun, but not for now.

Anyway the rest of the adventure was fairly well adventurous, trundling back down the hill carrying my bike down the multitudinous steps back to the car. I think these photos should give you an idea of how beautiful and peaceful it is in the Australian snow, and also just how difficult it was “riding” my bike up there. 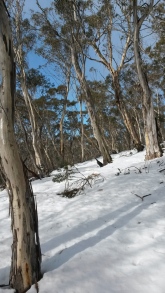 50 metres from the top of the ridge the snow was deep enough to make progress interesting. Absolutely beautiful though!

Simon turning around the try riding down hill. On his Surly Moonlander he had an easier time riding than me, but not much I don’t think. 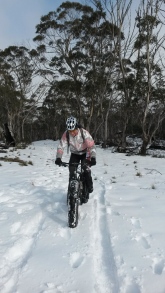 Riding – actually riding with pedalling and everything proper like! 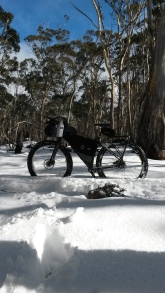 My ECR standing by itself in the snow. The snow was firm enough to hold it up right, but not enough to ride on! 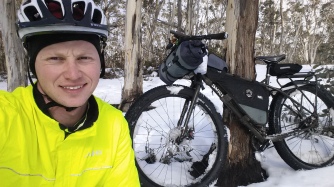 Just a happy snap to prove it really was me with my bike and the snow! 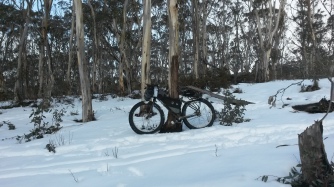 My bike!, with Bike Bag Dude frame bag, bar roll, chaff bags and everything else

For any doubters out there. Here is the evidence of riding in the snow as demonstrate by yours truly.