So after a large delay I’ve found our journal from or cycling trip around Tasmania (it was hidden on the bookshelf) and I have decided to start loadings some of the highlights and key lessons into a series of posts over the next few weeks. So here goes…

After delays at Hobart Airport I found Clare, assembled my bike very slowly and we got on our way. Today was only ever going to be a short day as we knew that we’d need to do some shopping, adjust our bikes and make sure we knew how to steer such heavily loaded bikes. From the airport we headed straight for Sorell, which was a fast flat ride but the traffic was pretty terrible so not that enjoyable. After stocking up on food and matches we turned east and headed towards the town of Copping for lunch. Copping is a fairly small town that seems to be almost entirely for sale, but we met some nice people who told us about a picnic area we could camp at that night.

Heading north from Copping we took the Forest Drive which is a dirt forestry road that winds through the steep hills and valleys on the way to Orford through a pastoral paradise before passing through the native forest plantations that make up a lot of that part of the Tassie Coast. After many many hills we rolled down a long steep hill to the picnic area that would be our camp. Supplied with cooking shelters, picnic tables, toilets and taps (that didn’t work) it was an great campsite with a creek to explore and some very friendly echidnas to play with.

It rained over night, not hard but enough to make the ride out of the valley we’d camped in almost impossible (I think it was the only time on the trip that pushing was required). Once we were out of the valley the riding was great with the ruins of Wielangta Saw Mill and views of Maria Island to keep us entertained. The island looked particularly foreboding  because of its sheer mass and cloud covered peaks.

At Orford we picked up some more supplies and met a cyclists from Brisbane who’d quit his job and started riding south. Three months later he was in Orford, with out a map or a plan, so we gave him directions and told him about where we had camped that night. Loaded with knowledge we went our seperate ways.

Continuing north we stopped at Triabunna for lunch which wasn’t the most exciting town, then kept on riding north towards Swansea. We considered stopping at a campsite before Swansea but it was busy and only the views were inspiring so we kept heading north to Swansea. Clare was not particular thrilled at this idea but the promise of hot chips helped us through the last 15km. Stops along the way included the spikey bridge which is an old convict build bridge which is massively out of proportion with the creek it is build over. The walls of the bridge are covered in outward facing stones (hence the name), though apparently no one knows why it was done.

We finally found a camp at the local holiday park and had it pretty much to ourselves. The row of plants along the coast made a welcome wind break, and we spent a pleasant evening lapping up the views across the Freycinet Peninsula and back to Maria Island. 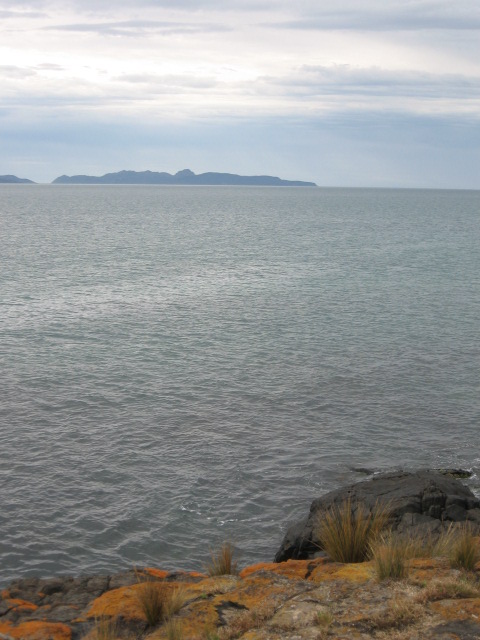 We swanned around for a few hours this morning because we were going to catch the ferry across the Swanwick which would have only required an hours riding that day. After a walk along the foreshore, during which time we revelled in the orange lichen that grows along the east coast of Tasmania, we returned to the campsite and called the ferryman to confirm that we wanted to make the trip. Much to our dismay the ferry service had been suspended (with no goal of resuming) and our goal for riding that day became a lot longer!

Riding north we battled a steady head wind which combined with the flat terrain did terrible things to my knee, however eventually the hills started and the variety of riding helped both our spirits and my knee to recover. Hills aren’t good, because you have to ride up them, but they are better than flat ground because there is variety and you don’t just have to slog on with one repetitive motion.

Over the hill we found a lookout that had sweeping views over the lagoons and rocky outcrop of the Freycinet Peninsula, then sped down the hill with the sole goal of making it to a nice place for lunch. Friendly Beaches provided the nice spot and a very important meal before the last slog into Swanwick which was a nice fast trip thanks to a steady tailwind. 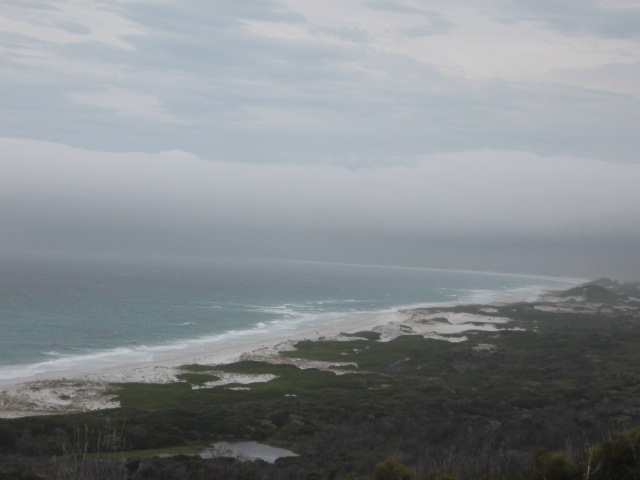 I managed to get out kayaking in the Yass River on Monday - after a foggy sub-zero start to the day the sun broke through for this perfect blue sky.
Sunday morning done right!
@omafiets shop ride this weekend was awesome.
Today I went for a shake down ride before the @omafiets ride on the weekend. It's the first time I have been out and done a long ride in ages.
I've started my responsible parenting plan. Climbing trees is an essential life skill right?
Great morning for a run! Thanks @wanderunning @tonineuhaus and everyone else for the great start to the day!