On Sunday we braved the early morning cold and got up at 6am for an adventure out to North Stradbroke Island, the largest of the many islands which form the barrier between Moreton Bay and the Pacific Ocean. The crisp morning air demanded jumpers to be worn with our shorts so it was hard to raise the motivation to throw our bikes in the car, rummage through the cupboards for food and drive out to Cleveland where the car ferry begins the 45minute journey across to the Island.

Having parked the car and assembled my bike (seriously one day I am going to buy a bike that fits in a car or even a standard bike box) we bought our tickets just as the ferry started loading. The calm and beautiful conditions on the crossing confirmed to us that it had been worth getting up, and that we weren’t mad. 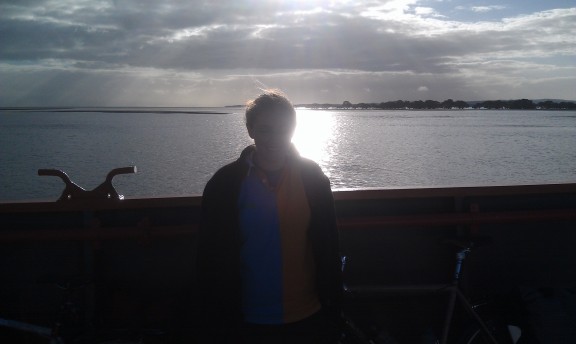 Our early morning ferry trip confirmed that today would be a good day!

Arriving on the island we were immediately in the shade of the sand hills the dominate the island. Panic filled me as my ideas of riding around on a perfectly flat island with lots of beautiful bays was shattered, but a coffee from the bakery restored my earlier optimism and we started riding towards Point Lookout at the northern tip or the island. The riding is easy, with good roads that seem well thought out and aren’t steep.

The hills are relatively large (80m maybe), the the slopes are gentle making them easy enough to ride.

We stopped for a swim at Cylinder Beach where despite being the middle of winter the water temperature was 20degrees there were plenty of people in the water. Eventually we made it to Point Lookout and The Gorge, which we had both heard about but had never seen. The Gorge is a deep cut into the rock that makes up the northern tip of the island, and looks like it was once a blow hole or something because of how deep and straight it is.

Rough seas and strong winds made it an amazing day to be up on the headland and the conditions looked treacherous to say the least. The wind was so strong that I was nearly blown over whenever I stood face to the wind. 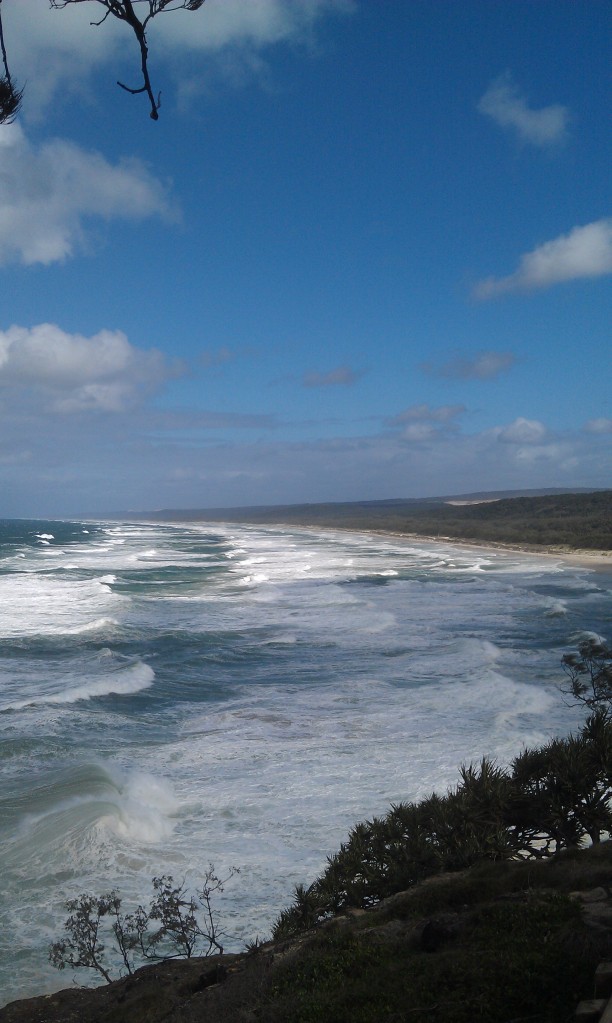 Google Maps Fail: This beach was recommended as a cycling route by the new google maps tool. 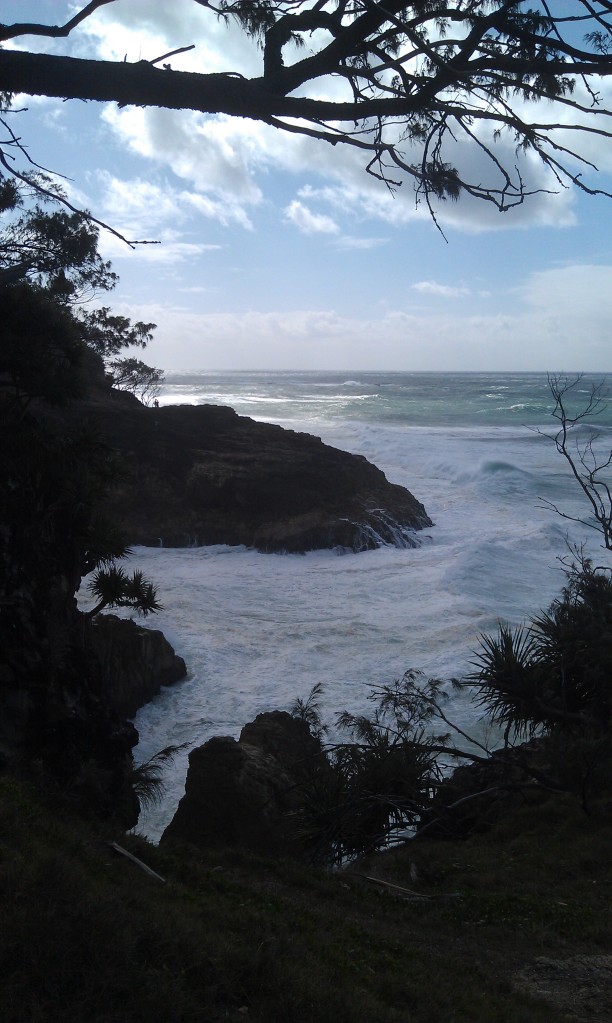 Whitewash, whitewash everywhere – not a place to swim.

The Gorge itself was almost disturbing with the amount of foam that had developed in the watery bottom. Every time a wave swept up the gorge, or a strong gust of wind occurred, thick brown-green foam billow up the walls and rippled like a mattress.

Thick foam over the water and wall of the Gorge was a mesmerising and slightly disturbing sight.

Above the Gorge bright sunshine and palm trees were a contrast to the conditions below.

After an ice cream and lunch we rode back to Dunwich then rode inland to Brown Lake in the hours or two spare before catching the ferry home.

Looking down on Stradbroke Island and Moreton Bay. 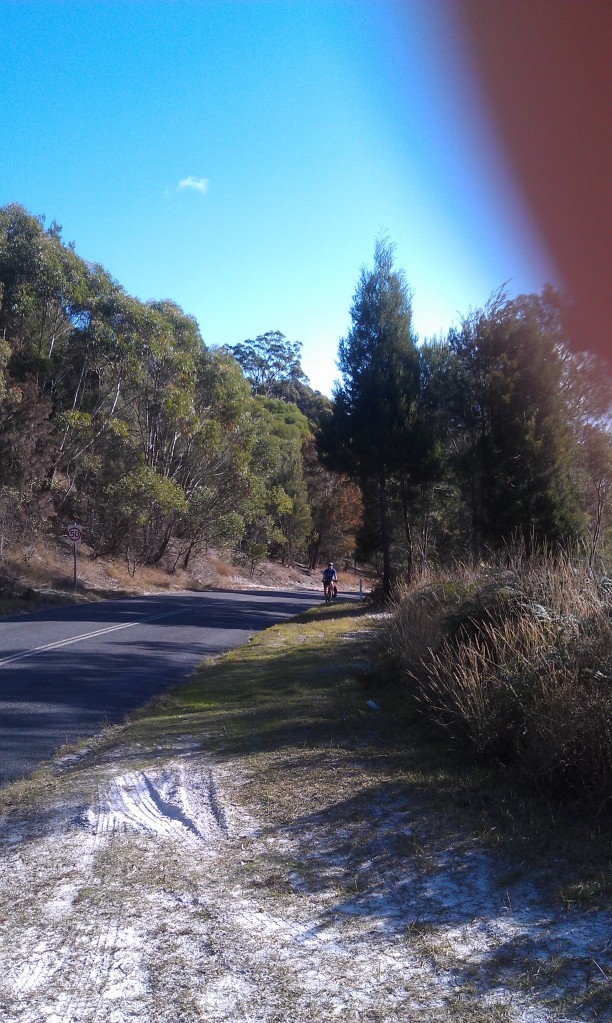 Clare climbing up the hill between Dunwich and Brown Lake. 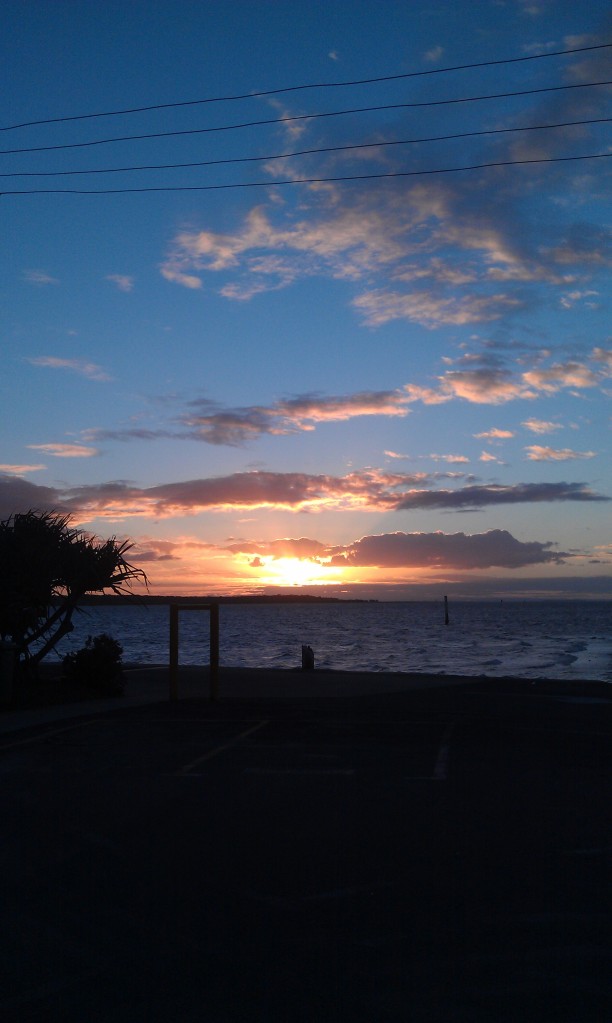